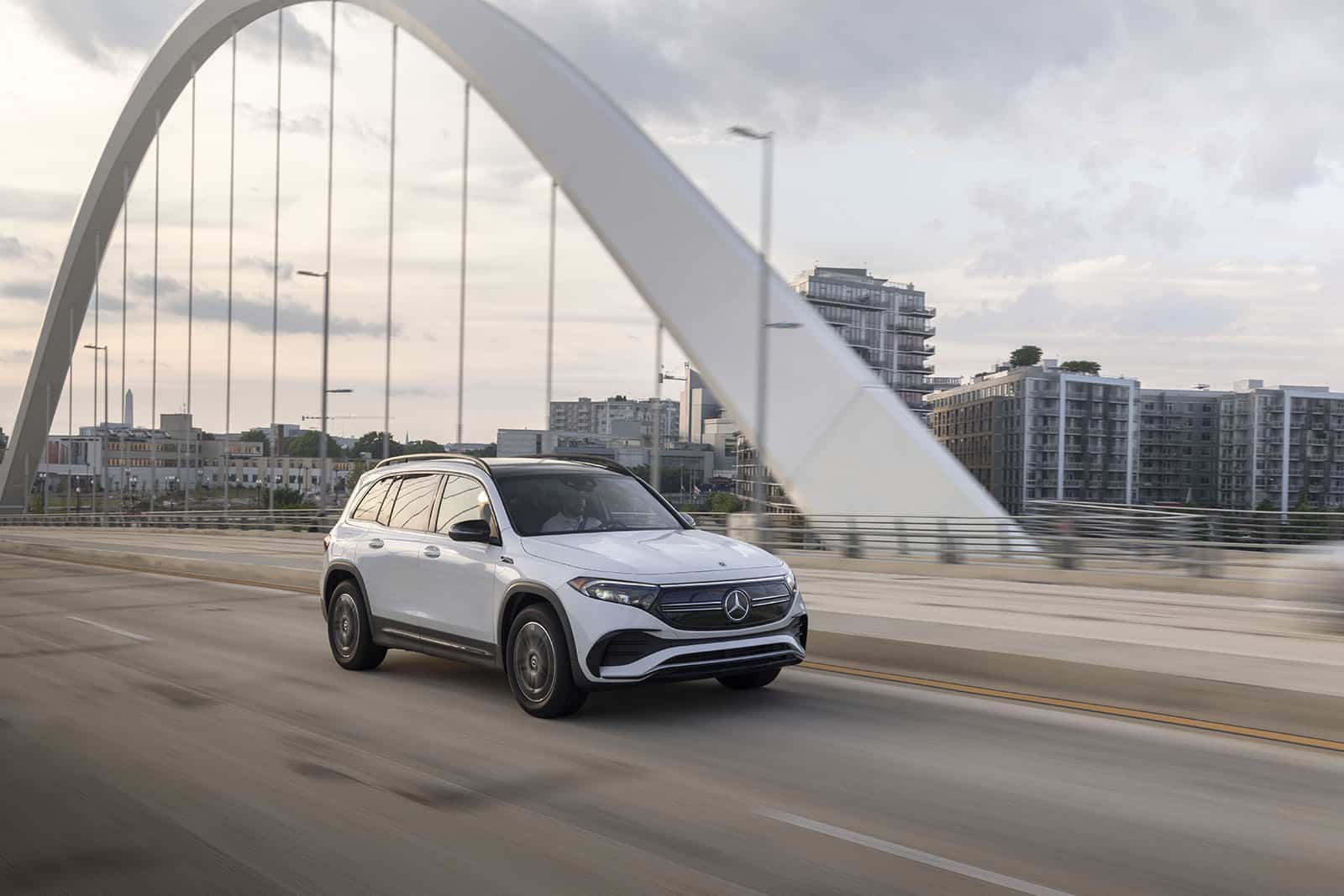 Barely a year after bringing its first long-range battery-electric vehicle, the big EQS sedan, to the U.S., Mercedes-Benz is ready to add a second model line to the EQ family. The 2022 Mercedes EQB offers an all-electric option for those that want a compact luxury crossover and who might otherwise shop for the conventionally powered GLB crossover.

Buyers will have two trim packages to choose from, the GLB 300 and GLB 350, and can order the battery SUV in either a standard five-seat configuration or as an optional three-row, seven-seater. Both models will feature all-wheel-drive and pack in a range of high-tech safety and infotainment features.

To get a sense for what Mercedes’ second U.S. BEV has to offer, I traveled to its corporate headquarters in Stuttgart, Germany, and then shuttled down to the automaker’s sprawling proving grounds near the Swiss border.

You might have to look closely to tell apart the new Mercedes-Benz EQB and the GLB crossover. Both adapt a classically boxy SUV shape, though the all-electric model incorporates a number of subtle, range-extending tweaks.

Two versions of the battery-powered model will be offered in the U.S., the 2022 Mercedes-Benz EQB 300 and the EQB 350. Both will be offered in the States exclusively with all-wheel drive. And, surprisingly, despite a significant difference in horsepower, both models are expected to deliver the same range — an estimated 260 miles using the WLTP standard, and an anticipated 230 miles using the stricter EPA test cycle in the U.S.

Both EQB models will come standard in five-seat trim, though American buyers will have the option to add a third row. But beware the third row is really only suitable for youngsters and tweens.

Overall, the EQB measures 184.4 inches in length, 72.2 in width and 65.6 in height. By utilizing a dedicated electric vehicle platform, however, Mercedes’ product development team moved most drivetrain components under the load floor and claimed back some of the space normally dedicated to the engine compartment.

The wheels also have been moved closer to the corners, so the wheelbase was stretched to 111.3 inches. The layout also eliminated the need for a center hump for the driveshaft tunnel.

While the brand’s electric flagship, the EQS, features an extremely aerodynamic exterior – dubbed the “one-bow” design – the new EQB has a more classically boxy, SUV-style shape. But Mercedes designers have taken a number of steps to cheat the wind and, in the process, add a bit more range.

That includes a more aggressively raked windshield, and a smooth, aluminum underbody panel. The familiar Mercedes grille has been replaced by a smooth panel with a lightbar stretching across the nose. As there’s nothing under the hood that needs to be cooled. And unique aero-style wheels help reduce turbulence and drag.

As with the exterior of the 2022 Mercedes-Benz EQB, the cabin closely resembles what you’d find with the gas-powered GLB. While the passenger compartment is a wee bit roomier, for one thing losing the center hump, the battery pack does intrude slightly, costing as much as 5 cubic feet of cargo space.

The instrument panel features twin 10.25-inch digital displays that live beneath a single pane of glass. The gauge cluster is bright and easy to ride, while the infotainment system adds touch capabilities.

Brushed chrome and rose gold accents give the EQB interior an elegant touch, complemented by leather seating and door panels.

For those who need the extra seats, a 3-row, 7-passenger package is available. But don’t expect to put adults in the back. Mercedes says it’s designed to handle folks no taller than 5’4”.

The base Mercedes EQB 300 features a single motor mounted on the rear axle. It delivers 225 horsepower and 288 pound-feet of torque. For those who want a bit more power — and additional standard features — there’s the EQB 350 which adds a second motor and bumps the pony count to 292 hp, and 384 lb-ft of torque. All-wheel-drive is standard.

Both versions of the EQB share a lithium-ion battery pack with a usable capacity of 70.5 kilowatt-hours. (The European version has a slightly smaller 66.5 kWh pack.)

Surprisingly, both the EQB 300 and EQB 350 have the same range numbers: 400 kilometers, or 260 miles, using the global WLTP standard. The stricter EPA test cycle is expected to drop that to somewhere around 230 miles. The final figure should be close to that of the similarly sized 2022 Audi Q4 e-tron.

The automaker has yet to disclose charging times but U.S. buyers will get the ability to charge free for two years using Electrify America charging stations — though only up to 30 minutes at a time. It’s expected that should provide as much as an 80% boost at public chargers that can deliver at least 150 kilowatts of power.

There are twin 10.25-inch screens on the new EQB. The infotainment system can be operated using the latest-generation MBUX voice assistant technology. It also introduces augmented reality on the screen to make it easier for a motorist to figure out where to go when using the built-in navigation system.

The “Navigation Electric Intelligence” system not only can calculate the best route but work in stops along the way, if needed, to charge up the battery. It can factor in traffic and even weather and the topography along the route.

I spent most of my time behind the wheel of the 2022 Mercedes-Benz EQB 300. Even with its single electric motor, it proved more nimble than expected, with reasonably quick launches benefiting from the instant torque of electric motors.

The EQB 350 clearly took things up a notch, cutting the estimated 8-second 0-60 times of the base model to somewhere just over 6 seconds. Top speed is limited to 100 mph.

If anything, despite being heavier, the EQB seemed to corner faster and more smoothly than comparably powered versions of the Mercedes GLB. The apparent explanation is the way the battery pack is mounted low to the ground, lowering the SUV’s center of gravity when compared to the gas-powered model.

One of my favorite features on the EQB models is 1-Pedal mode. All EVs reply on brake regeneration to recapture energy normally lost during braking and coasting. Instead of turning into heat it’s recaptured as electrical energy and returned to the battery pack. You can adjust the amount of regen the EQB provides but, in its most aggressive, 1-Pedal mode, lets you slow significantly simply by modulating the throttle. It feels a bit like downshifting a manual transmission three gears but here actually improves efficiency.

I was able to make one run of about 35 miles only applying the brakes a half-dozen times, even when negotiating tight turns and passing through a number of small German towns.

This year’s surge in gas prices has led to growing consumer interest in battery-electric vehicles. That conveniently comes at a time when a flood of new models is reaching U.S. showrooms.

The EQB could stand to get a bit more range — it falls short of what you can get with some versions of the Tesla Model Y, for example. But, in reality, 230 miles will more than meet what the average driver needs on a day-to-day basis. It’s only on longer trips that you’d need to be concerned. And there are more and more public quick chargers popping up every week — including many operated by Electrify America — which means free charging.

Getting past range, the 2022 Mercedes-Benz EQB 300 and EQB 350 models have plenty to offer, including all the features of comparable Mercedes GLB crossovers — and more.

Based on my time behind the wheel, I’m expecting plenty of Mercedes GLB owners will be checking out the EQB line — as well those now looking to go electric.

What is the range of the Mercedes-Benz EQB?

The two versions of the Mercedes EQB coming to the U.S. are tentatively rated at 260 miles using the global WLTP test cycle. That’s expected to drop to around 230 miles once the final EPA ratings are completed.

Is the Mercedes-Benz EQB all-electric?

While Mercedes offers a plug-in hybrid version of the familiar GLB SUV, the EQB is 100% electric and uses a different platform, though it looks similar to the GLB.

Is there a three-row version of the 2022 Mercedes-Benz EQB?

The standard layout of the all-electric EQB features two rows. An optional three-row package will be available in the U.S., though the back row isn’t suitable for full-size adults. 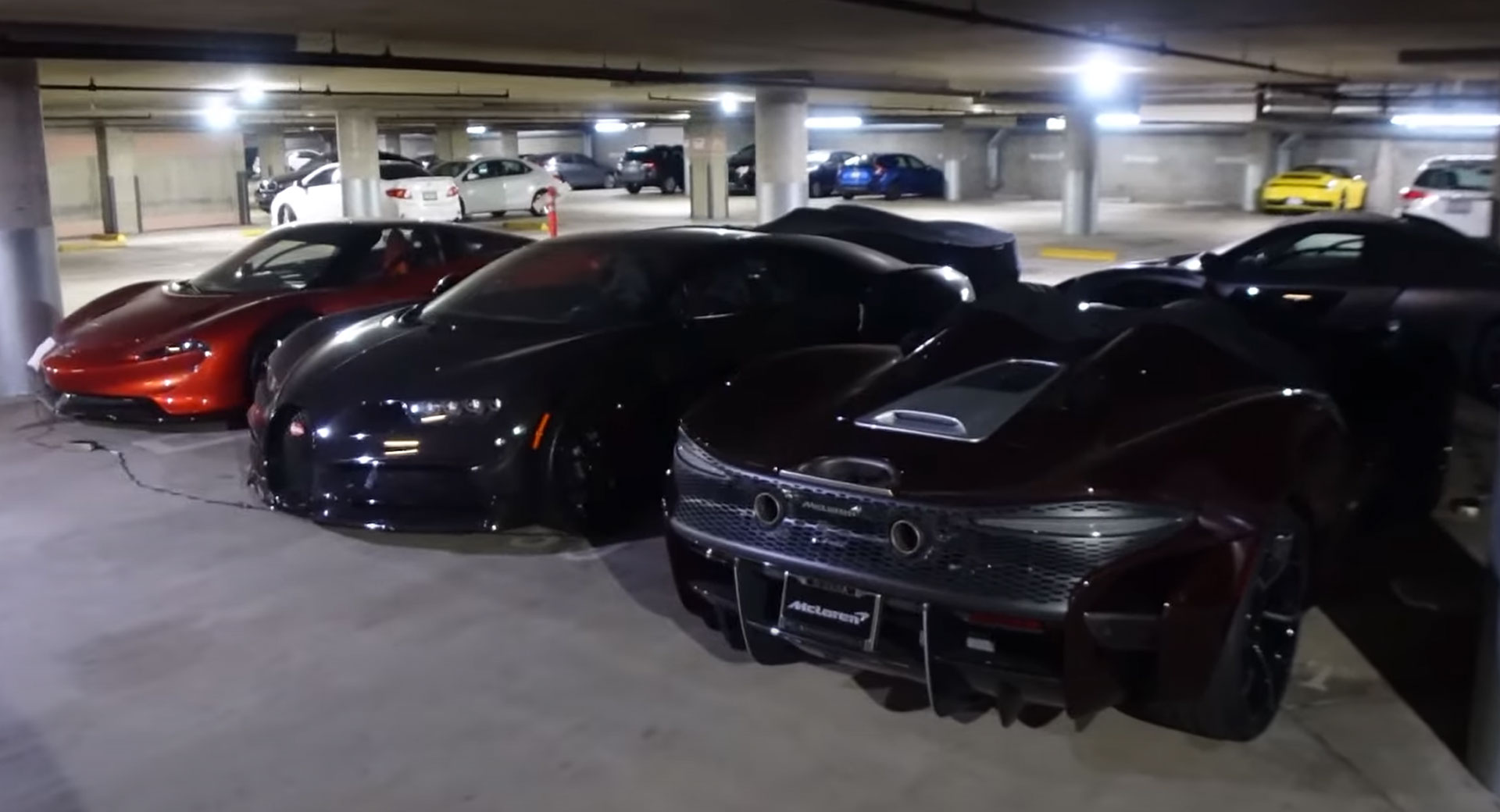 Car Companies and the Other Weird Things They Build